English Shows Tokyo had an interview with Ilana Labourene who is a professional actress and vocalist in Tokyo.

-You have much acting experience. Please introduce yourself and tell us your notable works.

I was born in Orlando, FL, but have also lived in New York City and Thailand. Before becoming a full-time performer, I was working as a photo editor, photo director, and retouching specialist in NY. I have always been both a visual and performing artist. In Tokyo I work mainly as a voice actor, as well as a singer and actor.

-How did you get involved with theaters?

I started performing in dance and theatre when I was a child in Orlando. My parents were musicians, so they strongly encouraged music and performance! Performing is in my DNA. Once in high school, I became a Thespian and won a few awards in local and state competitions. I took a 7 year hiatus while studying and working in NYC, but I was dying to get back on stage! It didn’t take long before I began performing in New York, and then I found myself performing in Tokyo years later!

-What brought you to Japan?

I was living and working in Thailand, and I took a holiday in Japan. One day I was lost in Nikko, and the men who came to help me were talent agents in Tokyo. I guess you could say I was “discovered” haha! I moved to Tokyo a few months later. 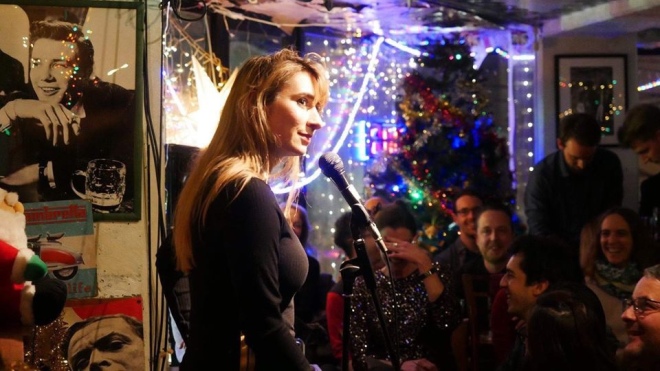 -You have both experience working for TV shows (recording? filming?)and theaters. Do you find any differences between recording(filming?) and live performance?

Absolutely! I find working on camera to be extremely unnatural and disjointed. On stage you are 100% present, living the character and the story linearly. With film, there are almost no rehearsals, you have very little time to develop your character, and the scenes are shot out of order. Sometimes you are talking to or reacting to nothing. Coming from theatre, I find the film process very challenging. But I embrace it!

-You also performed in Improvazilla, an improvised musical comedy show in Tokyo. How do you improvise such a wonderful show without scripts?

Chris Wells is an excellent teacher! For someone like me, who didn’t have much improv experience prior, he has provided a very safe place to experiment and set free your subconscious mind. The group works very well together, and you could say we create really nice “harmony” on stage. Finding and creating melodies in music is something that I love to do!

-You have a long and successful career as an actress. What is your best show/role in Japan? Please tell us your favorite/unforgettable roles.

My favorite roles in Japan are definitely Margery (Hand to God), Janet (Rocky Horror), and Mistress (Disturbance). They were all so different, yet equally juicy characters! I loved them all. Writing and releasing my first original song (How We Fly) was very exciting, and the music video we made won an award at a film festival! Im very proud of that.

-What is your next goal?(please mention that you are leaving Japan.)

As difficult a decision as it was, I am returning to America (for now) in pursuit of my dream of being on Broadway. I intend to audition in New York and London for theatre opportunities, continue to write music and train as a dancer along the way.

-It is time to move on and scale new heights. But English Shows Tokyo wishes that you don’t forget the old friends who have loved you always. Best of luck!